Such good stuff! I decided to start on the Gay City State Park side to mix things up since I have to whore Case area this time of year due to me trying to avoid running into hunters. I forgot how quickly I can get to the top at Birch Mountain Road without taking Ribbon trail, so I was on red trail and enjoying being able to crank steady and hard for awhile without getting seriously worked. I took some pavement to take a little blue section I have only taken once before, storming down it I was enjoying the cool off, it was super warm out, some 56 degrees. Rode over to Tinti and on the way caught something in my view to the left, a sign on a trail I have never rode but always noticed it being used by hikers. I like how the sign is to the point "DEER HARVEST IN PROGRESS". Made my way shortly to Tinti trail and enjoyed the smoothness, someone has been doing some work on it getting the benching down right and taking care of it wisely. Down to the reservoir and around the opposing side I normally don't take, pine needles kind of suck to ride on, especially since it rarely sees tires but none the less a change of pace is never a bad thing. Mixed it up from there and had mad strength in my legs, felt good as I charged hills on the single speed. Back across the road I had intentions to ride Ribbon trail which is outside boundaries of Gay City and sure enough one minute after crossing the road saw hunter number one and then I reluctantly turned at the fork for Ribbon and in the distance two more orange jackets. I said screw it, they can have that area so I went back the way I came and stormed down and made a different loop with red and yellow. I had to get a grocery run in following this rip so I was shooting for a 90 minute ride and did just about that. 96 minutes and 13.20 miles, that's pretty quick ride, mostly due to trails I chose. 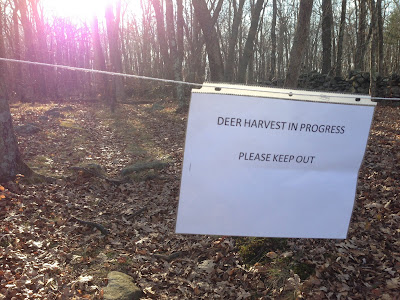 
EveryTrail - Find the best Hiking near New Haven, Connecticut
Posted by TheBIkePedalingGinger at 10:13 AM