Close but not quite

Friday morning I set out for Case for some frozen gravel power line roads. When I got to the trail head I was sick, my stomach was in pain and I took the bike out still and took a little walk down to the woods and had to call it off. I puked on the side of the road on the way home, turns out this cleansing diet I am on did not agree with me that morning. Checking the interwebs later that day I hear word Hale was ride capable, in fear of being let down I was less than ambitious to check conditions but hearing this was good news! So Saturday morning was the day, wake up at 8:00, feed the boy, change him put him back to crib and a free man I was. It was a later start than I wanted but it worked. I hit the woods and found Al's trail perfect, dry and snow free. As I rode I found snow, it was just soft enough to cause tough pedaling but somewhat worked. I lazily put feet down and walked sine I did not want to burn up my legs and heart just yet. I got to the normal start and things were on and off, since things were mellow it was on and off crusty snow. I was really hoping to be seeing less snow but at this point I was pedaling and pretty ok with that. Every little incline sent me off the bike, I just had no desire to burn out trying to crawl in the snow. It was pretty frustrating and I began to loose my energy quickly and then begin to feel sick again. So I walked for a good 15 minutes and then found a rock and laid down on my side and wondered how I was going to get out of this one. Damn morning smoothie with different ingredient still got me funky up. I took a good 10 on that rock and just lay looking into the woods, as dramatically dead the woods are right now I tried to picture them green and full of life that they are in the other time of the year. It was dreary looking on at all the gray sticks. I regained my strength and escaped another vomiting episode thankfully, so on I went trying to escape the grip of Hale. I began to pedal, still finding more snow than dry dirt but my demeanor getting better by the minute. I hit dirt road and was on my way to quit and as I passed wiggle I decided I was feeling well enough to run into it and see what it had to say. It said great things apparently, I ended up doing two laps on it. Still a lack of snow free trail but more dirt than anywhere else I had been. I stopped by a fellow group that had just finished riding, good guys that I know, I actually opted out of their ride and good thing I did right. All in all the legs and lungs felt pretty good. My storytelling is foggy tonight so excuse my lack of grammar. Tomorrow, Hale AM or Westwoods evening. (*&$%^#$^^%*&^&#$%#$%# is all I have to say about the weather, So *&^*(&^ tired of cold. Hope all is well fellow riders, relief in sight...maybe 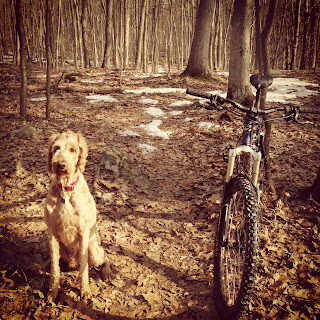 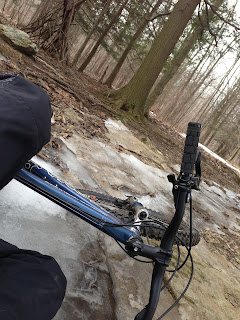 
EveryTrail - Find the best Hiking in Connecticut
Posted by TheBIkePedalingGinger at 10:33 PM