The rain fell Friday and brought temperatures down tremendously which was a great relief. We live in an older house with no central air so luckily I bought a window air conditioner where we can have at least one room for relief from the heat. It is so awesome walking into the bedroom on a hot hot day and escaping the dreaded heat. Yea so temperatures dropped dramatically, it felt so weird with the windows open and the low 60's were extremely welcomed by me. Despite the cool weather the woods soaked up the heavy rain and left me on great trails all Saturday morning. I started at the far beater end of Gay City and got down to business pedaling quick on the red trail. It took a little while to get on some narrow trail but I was soon on Ribbon riding it uphill. Sweat quickly formed on my helmet and poured frequently as I went full speed ahead. Legs felt ok, I pushed really hard Thursday and had felt what I took out of them but I had my tunes in and a clear mind as I planned the route as I went. I hit Birch Mountain Rd. and took the quickest route to the top of Tinti and to then to the reservoir. Upon arrival I wanted to take the newish trails uphill but realized my timing was important and that was a 3 hour ride with a hopeful 20 miles. I hit the brand new trail at Case and saw some familiar faces and had a hello, then chased them to the steel bridge and then I went wide on Blue as they went their way. Thingas were going great as I made my way up some stiff stuff on the SS. Feeling accomplished most the work was done as I sped up to Birch Mountain Rd. Still good on time phewwww, down red and then got lost three times, I know at Gay City right.......... two of the trails had me wanting a piece since it was single track but it only lead me to peoples backyards that are apparently too lazy to go to the trail head. The other one lead me to the end of a neighborhood rd.....DOhhhh..... arrived at the car and had .5 miles to make it a 20 miler so yes I pedaled in the area just to finish it right! Really great stuff, had plenty of time when I got home since I started at 7:30 and could now join my family with a nice walk at Uconn. LOVE MY LIFE!!!!!!!!!! 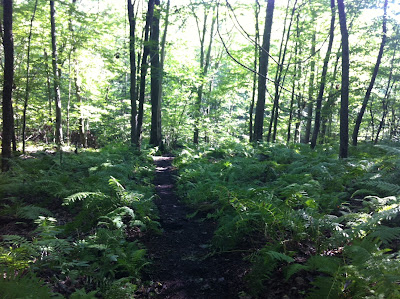 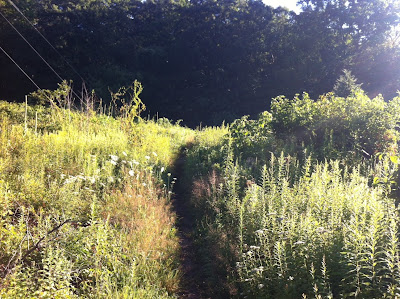 
EveryTrail - Find the best Hiking in Massachusetts
Posted by TheBIkePedalingGinger at 9:49 PM