Usually Sundays are no ride days but with my wife occupied with schoolwork and my mother in law Gloria in town from Utah, the baby was in good hands. I sent a text to Derek to see where he was riding and he had no plans so we ended up at Salmon River trails aka Belltown Bikes Headquarters. I was feeling completely fine despite putting down 30 miles the day before so we sent off. I quickly got disoriented by leaves, that happened a good 4-5 times where I made wrong turns and head scratches. I was leading the ride since I knew the trails better. As we got into the last hour of the ride my neck and head began to hurt. It soon was massively painful, getting to the car was the only thing on my mind I was feeling just absolutely terrible. I got to the car and was pretty scared at how my body was feeling. I was not over exhausted from the ride I apparently just got sick midway thru my ride. As I drove home I was getting chills and nausea and it sucked real bad. I got home and tried to shake it off, then I ended up soon in bed fully suffering a high temperature, then at 8pm my fever almost hit 104 and my wife wanted to take me to the ER despite me being against it so off we went. They took forever! I hate hospitals no one there gives a crap about doing their job except for the Dr. even that is no guarantee. I sat in the empty waiting room for an hour before I was admitted into a room bastards. After drawing blood, chest xray, flu test and a dose of Motrin which dropped my fever. After 5 long hours of doing nothing and people just moseying on in every once in awhile I got to go home. I got home and had a normal temperature had some food and went to bed about midnight. Shortly after falling asleep, the chills and sweat came one after the other, my whole body ached horribly. I continued to hit temperatures into 103-104F.I could not sleep no matter how much fluids and medicine went into my body, I was horribly sick. Same crap continued until Tuesday when I started to mix Tyenol into my doses of Ibuprofen and I was able to crawl out of my coffin. Anyway, great ride and so happy I came out of this alive, word of advice mix Tyenol 4 hours after taking Ibuprofen with high fever. Derek rides one of the first Belltowns to come out of Bob's workshop talk about short stays that thing is short. 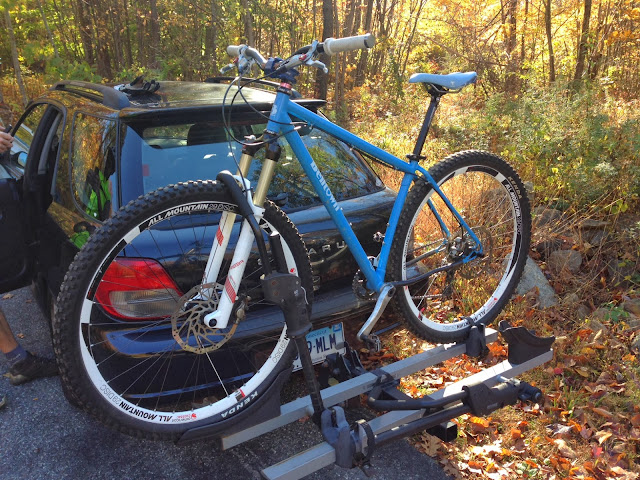 Salmon leafy belltowns at EveryTrail
EveryTrail - Find the best Hiking near Hartford, Connecticut
Posted by TheBIkePedalingGinger at 10:01 AM