So thursday showed its face and I did not want anything more than to get out and pedal! My allergies were still being very tough on me but I was not going to let it get the best of me. I had suffered most the day getting by only with my inhaler, and as I was driving to the ride I questioned my sanity for going out for the ride. I held on strong and got to the lot and took a test drive and the lungs were feeling ready and so was my pal Bentley. Few familiar faces were at the trailhead and before we knew it off the four of us went flying into the woods like a bat out of hell. I was holding down the team in the back as usual, the woods were so incredibly green I wish I had the time to stop for a few pictures but these guys were flying! We got through the twisty's and down the hillside. It was feeling so good to be out and I was feeling good but not as fast as my fellow riders as they began to disappear into the thick woods. After we got through the technical mayhem I finally caught view of them and shortly after we spent a second stopped. I was looking around and caught to my eye a tick about to latch onto my leg and I peeled that sucker off so fast, I hate hate hate hate ticks, stupid little critters that latch onto us and spread they're nasty diseases, I wish death upon them all. I had already peeled one off little bowies belly and I was beginning to worry for bentley. Soon enough we were back ripping into the woods and had no time to think of ticks, up down and through the woods we went. Out to slick rock oooooh what fun, over to bipolar and on to scoliosis. Onto the rock trail and then wiggle back to the car. Good fun was had and at a seemingly fast pace, even the home stretch to the car I felt like we were still in a rush. Look at my phone and saw trip time was an hour and twenty nine minutes, wholly smokes! Seriously quick with the normal 2 hours it takes on most the days there. my performance was good for the condition I felt I was in despite playing catchup most the ride. Felt so good to be out that afternoon and headed home with a smile upon my face. 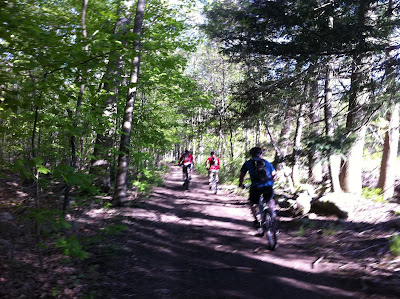 EveryTrail - Find the best Hiking near Hartford, Connecticut
Posted by TheBIkePedalingGinger at 9:05 PM