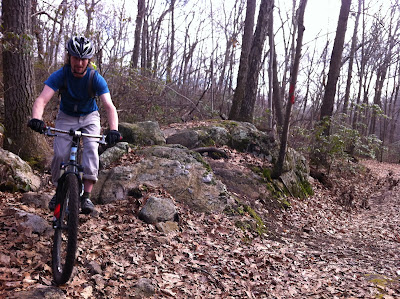 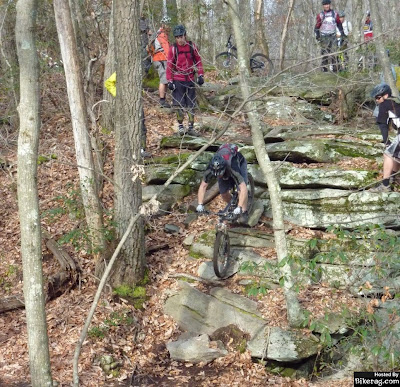 Got out on another really really nice day and chased Paul around millers. Location was up in the air and with a wide open day opted for the haul over to Millers. I knew going in that anything could happen at this place with all the logs and features and such and felt like I was playing with fire but was able to do a full pull with only minor wounds and a disfigured deraileur. My game took some warming up from a terrible nights sleep and my lungs took an absolute beating, I can't remember huffing and puffing so hard in the last few years of riding. But seriously between the logs, the rock piles, and the mind altering balance fest to get 8 miles out of the place is a feat for me. Some logs were conquered that I had not had the honor of finishing and some were failed in excessive attempts but I still left their without my tail between my legs. Somewhere along the many log rides I took a ride to drop and missed the second drop and the deraileur got snagged and sent me and the chesty into the ground and a bike into the back of my head. Shook it off and still felt pretty good but was a bit hesitant on the rest of the logs and passed on a lot of them. Paul was putting up a good show nailing a rides left and right and presenting me with a lot of work to do. Riding with Paul, he never turns down a log ride in light or night, things I see and was like uhhhh really? he just goes at it and gets to work which has really helped me work my game up from no log rides to log rider. I owe most my cuts and bruises to following this dude onto the features but has made me 10x better rider. Paul you are the man and you will be sorely missed, in the mean time I will keep log riding so I can make you feel terrible how sucky you will be shall you ever return hahahaha. I was joking with him saying he was going to be the first guy to be cutting down cactus and putting them together to re live the wood filled forests we so very luckily get to ride. Anywho shred on, hope you ejoy the video. By the way when I was riding home I almost drove the car up a guard rail thinking I was still on my bike and not in a fricken car! Millers has forever warped my mind. Thanks for all the hard work!