Let me just say, those afraid of doing or unwilling or even can't do morning rides are seriously missing out! Morning rides are the greatest thing lately for me on two wheels. Yes it is a little bit of a drag getting up at 5am but when it's something you like to do this much it really isn't a big deal. The morning rides are very tranquil, the birds chirping, the green scenery, and all the smells and sounds that come before the sun comes up every morning. When you get up this early it really puts me in my place, I am just a body on this incredible planet where the sun rises and sets, just one other being among all the others that was put here for a reason and that reason was to LIVE. Obviously a huge part of that is being out in the woods on two wheels having some fun. With that said, sorry for the mumble jumble and stuff just speaking my mind I guess, this morning was nothing short of special. Some heavy rain hit the house last night as I was getting into bed, and sure enough by morning things were soaked still. I wondered if the ride was still on, I was to meet Collin at 6:00 at the Homestead. No word from him so hopped on the single speed and wheeled over trying to ignore the hop on my rear rim. Sure enough he was there so we got cranking. Collin has become a great riding buddy, he also rides from his house to Hale and rides a good pace and is a great guy. On the way in alot of the fog had lifted but still some evident, the dirt was a dark brown and very firm and soft in just a few places. The trees and all things that breathe and live in the forest were a lush green, surely they got they're fair share of drink last ngiht and were weighed down with water and offered refreshing slaps of water. With the birds singing and trails grown in, I felt like I was pedaling through a jungle. I am not over stating that comment what so ever, on that picture which was taken on scoiliosis, it gives some of the feeling of what it was like this morning. These rides are nothing short of awesome and I will continue to do them until for some reason I can't, such as the turkey hunting season that is finally over. What a morning, really put a glow on my day and a smile on my face. If you read this and Mountain Bike, find a way to do an pre dawn ride, just do it! Doube feature ride today after work if all goes as planned. 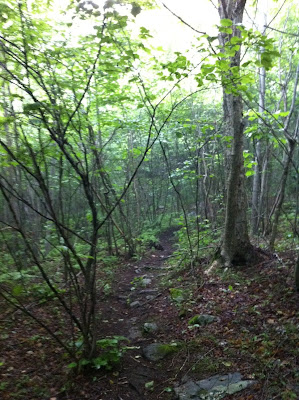 
EveryTrail - Find the best Hiking in Connecticut
Posted by TheBIkePedalingGinger at 12:42 PM