Thursday night, this would be my last chance of getting out on the bike since just me and my wife were heading out of town to a cabin in Idaho. My Mother in law was over around 5pm that night so she could watch our little one, with the luxury of mom and daughter in the hands of my boy I was rendered not much help so I ran out into the night for a ride. I was absolutely thrilled I was going to be riding, it was warm like 40F something and I was in shorts at 7pm. The mission was going to see if I could find something new to ride, I know of two dirt roads that run along the benches but never set rubber down on them. So I did a standard loop up rattler and down and then back up and a run down. The next mission was to ride shoreline to the Orson Smith trail head and tear down that sucker to one of the dirt roads. That ride down was a lot more fun than I expected, pretty sandy too that made hairpins interesting. Hitting the road I had a fork, the high road or the low road, I chose high and began climbing. The road was obviously a bit dull but it was a beautiful clear night and all of Salt Lake was sparkling. I spotted some singletrack off to my right but had to ignore it since it likely ran into the neighborhood by the look of it. But after spotting another singletrack that I have never rode this one looked promising so I took it. Had the name of Quail and it was short but nice, I can't believe I found a trail I have not ridden! The trail ended pretty far down and finally answered my question as to where does that go when I have passed by. On the last stretch to the car I am not going to lie I threw my hands up and yelled a good weeeeeeeee in childish excitement of the good ride! Forecast is outstanding and more rides to come! 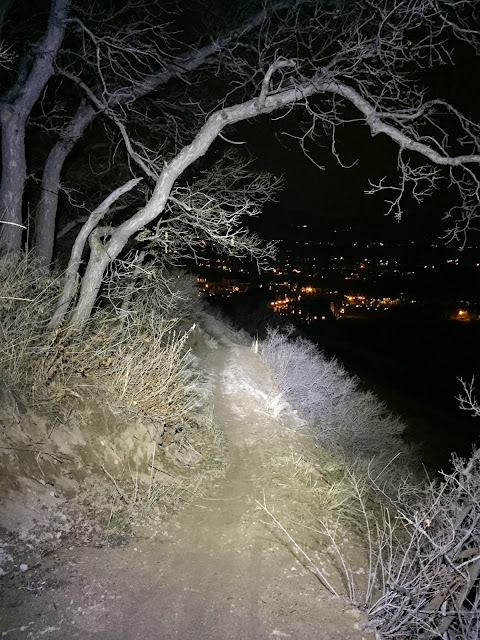 Posted by TheBIkePedalingGinger at 3:36 PM