With incredible weather I was anxious for my next ride and luckily it would come in the way of another daylight ride! Knowing all the trails are now open I was looking forward to putting down tire on that familiar dirt. Arriving to the parking lot the place was bumping on a Friday at 1pm. There was no lack of each user group from beaters without helmets, to full face helmeted endure bros with go pros riding tame trails, and also those strange men who feel the need to dress up in ridiculously goofy looking uniforms with stupid brands and logos written all over them like they're some sort of champion. Ok I am a hater I know, I am not proud of it, I fall somewhere in the mix, a dude who can rip a downhill on my rigid harder than most can on they 160mm trail bikes until the trail gets chunky. Climbing I was feeling weak and powerless from the beginning, I got stuck behind a group of 4 as soon as I got going and I lurked behind quietly until I could find the tiniest of places to pass, I usually annoy somebody until they let me by, I fell obnoxious by yelling to others in front of me so I just linger and wait until they let me by. I was already missing the quietness that has been this winter while I mostly had the place to myself. This is a tough realization of the months to come as I have to share the trails with masses of the population and I guess that's fine, just a little less peaceful sometimes. I was set on maybe 20 miles of riding, as I rounded the top of my climb I headed over to Eagle Crest in hope to escape the crowd and it worked. I was eventually faced with the choice to ride the Maple Hollow DH trail but instead opted for a more frame friendly trail. Such a good run down to Ann's and kept going until I was back climbing the canyon up Canyon Hollow. Hitting the summit was pretty easy and still not great feeling legs I was climbing just fine. Headed over to Ghost falls on a good tear, somewhat missing my full suspension but doing just fine as I rolled down and made a few more loops and hit my goal of 20 miles in 2.15 of riding. Good deal for dead legs. 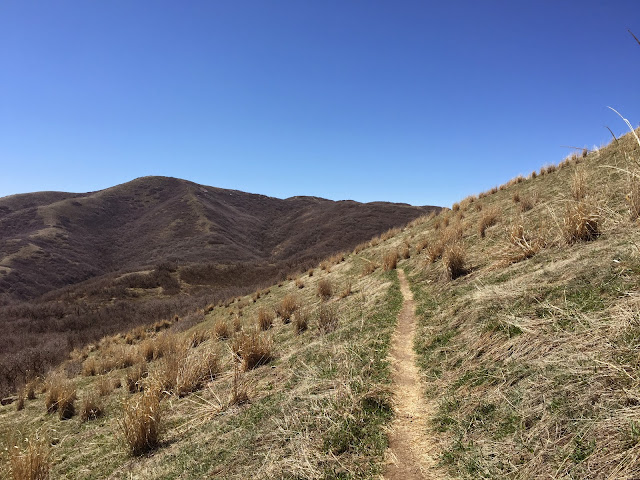 Posted by TheBIkePedalingGinger at 2:13 PM