With a itch to ride I woke up early, it was rough that I had a horrid night of sleep of like 4 hours but that was not enough to stop be from leaving the door before 5am. I had my goal of 20+ miles of Corner Canyon and covering the Maple Hollow area trails and everything else after. I was amazed to fine two runners in the parking lot while I was getting ready, I was not the only nut out there at 5am on a Friday morning.
I started my ride the normal route and then rode shoreline west to make my way to Oak Hollow to Ann's. I was glad to was in the 40s and my long sleeves and shorts was just right as I made a comfy climb up the mountain. Then things levels out and had a nice nice ride down Anns and then a climb up Clarks. I think I still prefer climbing Canyon Hollow but Clarks is always a good route too. Off to Eagle Crest and 90 minutes into my ride the sky was finally turning gray and my light would be going off soon. Still undecided of my exact route I ended up with the more mellow option which avoided the beginning of the Maple Hollow DH trail but I would attack it from a lower elevation. Catching air on the Maple Hollow felt funny on my bike and I was on egg shells trying to soak up the bumps and rattler with no suspension but I got down just fine.
Then a ride up potato hill just to ride more trail and over to Canyon Hollow and a rip down Ghost Falls to Rattler. It was then that I was at the three hour mark and should probably be heading home to help out. Phone said 26 miles in three hours, not a bad pull that will do. 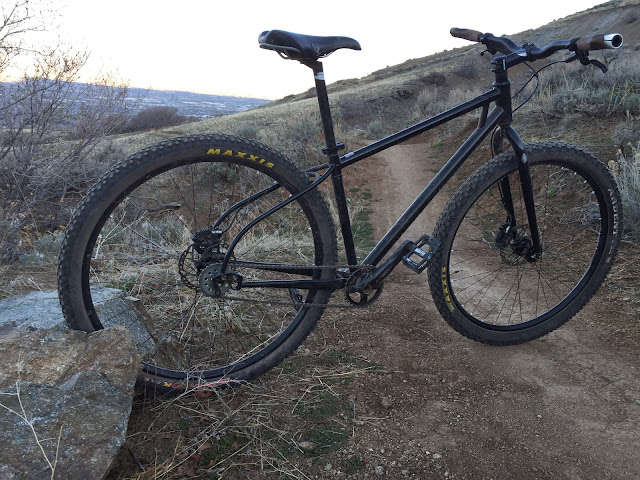 Posted by TheBIkePedalingGinger at 3:10 PM