Another great thursday night ride! I was worried all week that a evening ride would not be feasible with my new job but I managed to work out a deal allowing me to get out at 4:00 on thursdays for the short time being. So it was off to Case to pedal with John and Bentley. I geared up with the Single Speed being that I have spent quite a bit of time off of it and was really looking forward to getting it back into the trail. Last week I rode it at Case and it was feeling awfully sluggish I was wondering if I tightened the crank arm down too much since I don't own a torque wrench :( But as I started pedaling up the carriage path things were feeling good, I was strong and lungs were in good shape and definately ready to hit the trail. We flew down blue which never disapoints since it feels almost all downhill and then worked our way around to slick rock and back up blue. It was so nice to feel strong and fresh on that ride and I look forward to more of that hopefully. We rode quick and gracefully and before I knew it we were at the lookout where I had to snap this pic which is really cool. I think I might have been over riding lately, not that I would change that by choice, but with the new job and commute it will make it harder to get out. That's ok because I should probably spend more time sleeping than waking up to 4:30am alarm clocks. It's crazy cause it's not like I am a racer or trying to get a certain weight I'm just a guy out there enjoying the pedal for fun. This was a great ride and as usual can't wait until the next one. Hoping for saturday ride but will probably be sunday for the next one. Enjoy 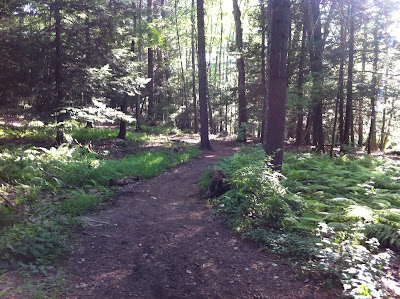 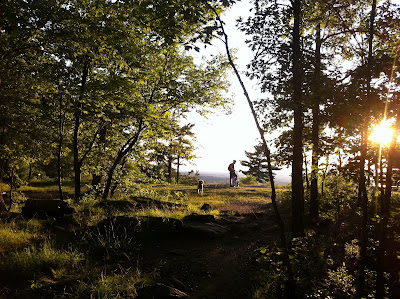 EveryTrail - Find the best Hiking in Massachusetts
Posted by TheBIkePedalingGinger at 9:57 PM