It was a sunny fourth of July day and I had spent most the weekend since saturday getting some serious lounge time and perhaps I should of had some more but it was a nice day and my wife was busy with her schoolwork so I figured it wouldn't hurt. Derek had posted if anyone was interested in a ride and I said I would, so when game time came around he was not sure he could make it. I was running late not expecting derek to show but I got a message that he was already there and ready to rip. So me and Bentley jumped in the car and off to case we went. Met in the lot an got right to climbing, the big was feeling sluggish but I think it was just me. I was happily back the 29er. I had installed a fresh new crank set and all things were performing as they should luckily, that's actually what had me running late. So I was slowly making my way up trail heart beating thru my chest and all but I did make it up to the top. The trails were great and the sun was shining I was really glad to be out riding. We rode some of the normal trails which are never a disapointment and then made our way over to buckingham reservoir which always makes for a scenic ride. On the way derek had me hop on his belltown and it felt so so soooo good. I hope one day soon I can build a great bike like that one, it left me feeling a little sad about my current ride but I was still very humble on my raleigh. We rode the shoreline of the reservoir and then up to tinti to climb up it. By now I was just low on steam and was hitting on the energy reserves but I chugged along trying to keep up with derek. Finally once that was over with got some downhill and enjoyed ot thoroughly. Back up Case and to the car I went. A great ride on a great day. 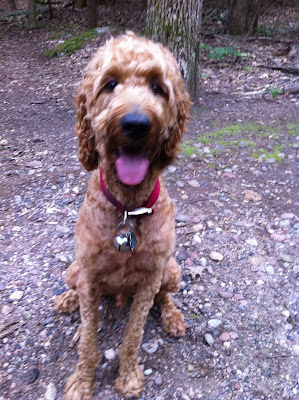 EveryTrail - Find the best Hiking in Connecticut
Posted by TheBIkePedalingGinger at 9:57 PM