After a tornado watch and nasty thunderstorms passed through after Tuesdays ride it was looking questionable what was going to happen for Wednesdays ride outlook. The skies opened up in the late morning and out poppped the sun and what felt like a rising humidity. I began to realize today could be a go day to ride and kept it in the back of my mind as I knew LuAnn probably preferred me to be home to help pack for our expedition. As it got nicer out the bike whore in me started to hint I was interested in a ride, and sure enough she eventually told me to beat it so I did so. I decided to ride Hale since driving was going to kill time I did not have. I popped into the woods knowing I was going to sweat my face off and proceeded to do so shortly. My trail has grown in nicely, hard to believe there is even a track considering I ride it once a week lately. As I entered the main trail system I was pleased to find no soft spots and this ride was a go! Set off on a fast loop since I had 90 minutes to shred. Rocks and roots were just plain sketchy as it usually is after rain and humidity, I must have popped off the bike 6-7 times in these ICY conditions. None the less it was nice to be out although the sun rays were now gone and I was watching a storm cell NW of me on the Doppler on my phone. I decided to end my pedaling by completing my favorite section known as Al's trail. Almost halfway in, I came across tape which the loggers had put up to close the trail. I got so bummed out, as you might have seen from last Thursdays ride the loggers had saved the trail and coming just feet from ripping it to shreds so I was in hope they might leave it for the recreation peoples, but I just don't know. I guess when I get back from vacation I will find it gone or re routed or help do the re route who knows. It's sad to see them clear huge areas like that and whether they really benefit the forest I don't know but it's pretty sad to see a thriving forest turned into wood chips but I know they recently did a big survey of the health of the forest and it needed some work removing invasive species and restoration. Either way I am sure they know what they are doing. So three rides completed this week and I can end on that note. Well that's it, no more riding for the next 11 days so enjoy the woods suckas! I'm out 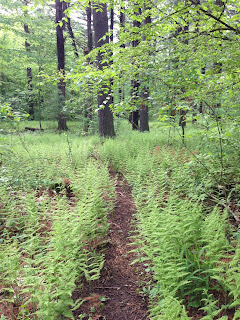 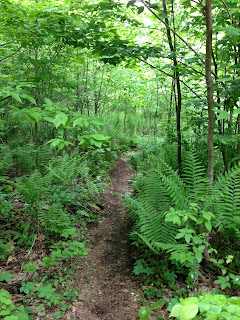 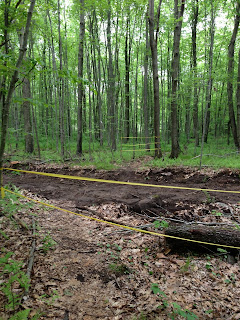 
EveryTrail - Find the best Hiking near Hartford, Connecticut
Posted by TheBIkePedalingGinger at 8:16 PM