Off on another ride with John and found myself reaching for my old trusty gears n squishy dawg, due to the humid slick woods. I realized shortly it was a poor decision when the drive train took on a mind of it's own and spit the chain off the rings and ghost shifting on the rear. I still have not changed the free hub and things seem out of tune as well despite just returning from the bike shop. decided to take another chance I guess. Oh well I was riding whether the bike like it or not. It was nasty humid out but I had a chance to ride so you know I took it happily. Wasn't long and I was struggling to keep up with John up front but he never got too far into the distance so I was not holding him back much. I was feeling low on energy, by the time we began to climb up high to the ridge I was not feeling so hot, I was really worked and not sure what was bringing it on. I slowly but surely got up high and tore down the hill letting my frustration out and in the process something went wrong, probably free hub and made a mess of my chain and tore the rear deraileur cable. Surprisingly I was still able to shift but after that it was still pissed off so I chose a gear and left it there for the remainder of the ride. Down Bi polar and then climbing back up the road I got super winded, light headed and just a sick feeling so I stopped right before the start of the next single track and took a minute to breathe and try to regain control. I can't remember feeling like this in a long long time, it was pretty scary at the time but once I composed myself I got rolling, until after a few minutes of steep climbing it came on again and once again I stopped. By now I was definitely holding John up and felt bad but the way I was feeling was very unusual and I wanted to ride out and not be carried out. Once that trail was complete I felt a load of my chest but still limped through it. Still not feeling well but continued on through wiggle and then pavement to the house. The only thing I can link the onset of sick is either my lunch a hot sauce filled grilled chicken buffalo sandwich or dehydration or energy packet thing I tried before the ride. Neither seem plausible so I am going to call this a fluke and look forward to getting back out and regaining my composure. For now the gears are out, so SS only, the way I like it anyway. Oh yeah a box came the other day, my father in law works for a company that manufactures energy packets, I got to abuse these while in Utah and never would buy them but hey they're free! I never notice much gain with them if any, but I am not hurting anything unless I did on my last ride when I got sick. 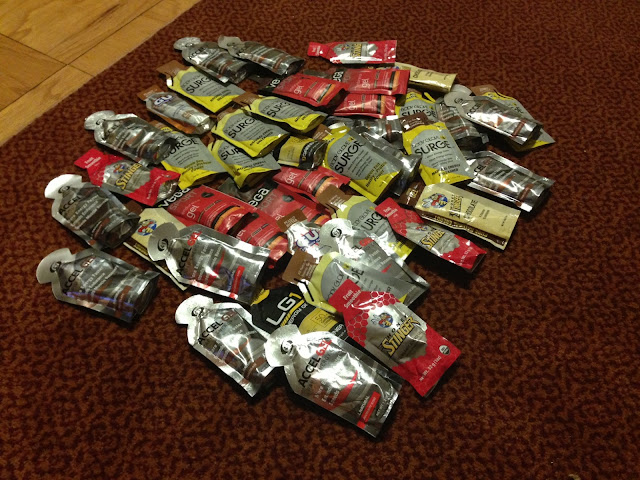 Haled at EveryTrail
EveryTrail - Find the best Hiking in Connecticut
Posted by TheBIkePedalingGinger at 1:55 PM