It was a stormy few days, the humidity has been insane, after one last band of bad weather moved out Tuesday I was itching for a ride. I rarely have Tuesday nights free since I am with a scout program and since it was canceled I was hoping to ride. Once I got the word that my lady was going to be home around 5 and she was going to spend the last 90 minutes with the boy so I could ride! I sent and invite to Colin last minute and he was game to meet me at Schoolhouse Brook for a 6pm start and lights for the end of the ride. I was on the Dawg and it felt pretty cushy as usual, with slippery trails the extra rubber on the tires and gear options was graciously applauded. Colin took me down a pretty nice downhill which I mever knew existed. From there we made our way out to Wolf Rock where we found some new trails. There were quite a few forks but we rode a good section, pretty flat mellow XC but very soft from lack of riders. Come fall this is going to be horribly difficult to follow so I hope to get back and help break it in. After we did a lollipop I was faced with the decision to stay in the Brook or hit pavement to Mansfield Hollow and I chose to cross the rd to get in a nice stretch over there. I was pretty beat on that roller coaster trail but kept at it as lights went on. I snapped a picture which was the nicest sunset I have seen all year. Fog sat in the hills vaguely reminding me of what the REAL mountains are like after weather moves in/out. We had to make our way back to Schoolhouse which I have never done mid way so Coling guided us. It was pretty uneventful mix of trail and pavement until we crossed back into Brook. Once there a wrong turn was made so we pedaled pavement back to the car and no big deal. This was a good ride, I love finding new trail. 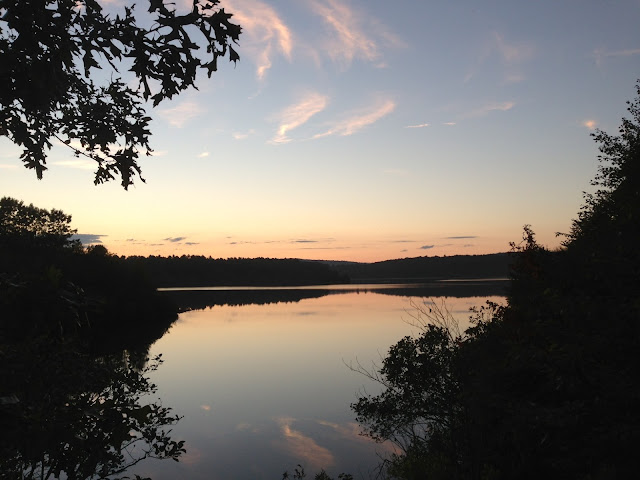 Brook hollow w new trails at EveryTrail
EveryTrail - Find the best Hiking in Connecticut
Posted by TheBIkePedalingGinger at 10:56 AM