Never turn it down

I love to ride Monday's since it's the beginning of the week and I like to start it off on the right foot if I can since I never know what weather or speed bumps will come up later in the week. I was filled with joy when my dear wife offered to meet her at school and swap vehicles and child so I could snap a ride in before dark so I jumped on it. I knew I could get a solid 90 minutes at nearby Hollow in light and maybe just maybe and extra 30 in the dark if I was feeling brave. The darkness in the woods just creeps me out when I'm riding solo, it always has and likely always will. Earlier I sent a message to John to see if he would join me on 2 hours and fun and when he opted in I was pretty happy he was going to join the ride. Me and John use to ride quite a bit together, mostly with a great Tuesday night crew we use to gather that has seemed to quietly disappear the last two years. We set off into the woods right at 6 and I had a tough choice of using some of the new trails I found or doing the fun big loop, looking for fun and not confusion I went for the big loop since I had company. The Hog felt fantastic as it had previously, I was working a bit harder with John at my heels with a fully suspended 29r. I rode pretty quick and cleared two sections I normally don't due to 32x22 which felt nice. But the flats were tough keeping my wheels spinning with no gear. We were all the way around the lake before light started to fade and I was impressed how much good light we actually had so far in the ride. So on went the lights and down to the river and up stoned hill. It was kind of nice riding it in the dark since there was not much visual on the steep grade which meant less fuss waiting to hit the top. Then it was a quick ride downhill then a few wrong turns and back tracking due to my poor navigating and disoriented to darkness, we were at the car finishing 15 miles of riding. Was a mighty fine evening and thankful for John's good company and to my wife for allowing me to feed the need! 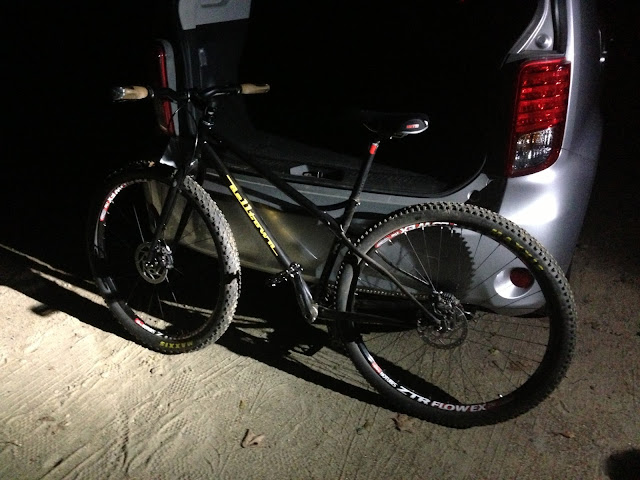