Tuesday morning ride crumpled when our little doggie Bowie was licking his chops all morning, he kept LuAnn awake most the morning so when I got up at 5:30 I took over the rest of the morning shift with Bowie and since he had his second ever seizure the day before I needed to monitor him. So we slept on the couch and lounged as he continued to lick obsessively. Poor dog, I am so worried about him, he is such a little character and a huge part of our life and we hope we have no more of these episodes. I gave him an antacid pill and it seemed to cure the licking, could have been acid reflux, allergies, who knows. So he is better so I plan for the next morning. Up at 5:30 again this morning this time all was going according to plan. I was scared out of my mind that it was going to be nasty cold like it was that night before, luckily it was cold but not windy. I met Colin and we got cranking on a new trail. The ride was going really good on the single speed, I was so stoked to be back on the SS and it felt so good and I was riding way harder than my geared bikes. Colin was not feeling well so after an hour of trail he had to bail and I continued on and really enjoyed the crap out of the rest of the ride. I ended up back to the house after 90 minutes to find everyone still sleeping! I can;t wait for the next ride, it felt so good to get out and pedal. Thursday night is the next planned ride so bring it on! 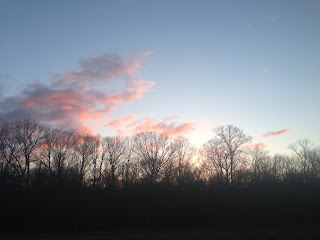 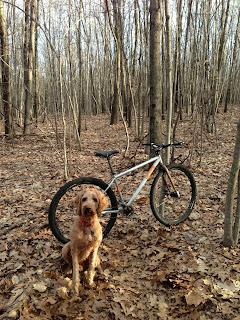 
EveryTrail - Find the best Hiking near Hartford, Connecticut
Posted by TheBIkePedalingGinger at 1:40 PM