Set off for 7pm start in Gay City, was looking for a fast easy ride and this certainly did the trick. Me and Bentley set off on Red with a plan to ride into case and hti Al's trail and then navigate the way back according to darkness. Starting and ending in gay city is not very exciting but it is a fast easy ride to and from. With some rain in the morning I was so happy to find the insects at a minimal compared to the last two weeks which was very nice. We hit Birch Mountain road in a mere 20 minutes since I did not use the ribbon trail and we crossed into case and rode the gravel road to Al's. Nothing short of sweet as usual for that trail, I notice Bentley was fading a bit as he fell behind, I have come to realize he just is not the 1-2 year old pup he use to be. I found myself on the brakes alot trying to keep him no more than 50ft behind me on the lengthy decent from Al's to the reservoir. When we hit the reservoir I decided to let him have some water time since he usually seems to enjoy that. Found a stick and he reluctantly went out to retrieve it, probably cause he swims like a sally. I have no idea where his Golden retriever genes are when he hits the water, he has always been a terrible swimmer but now it's just embarrassing. I will give him some credit to keeping to his word and bringing the stick in, he knows as he gets close to shore he will touch soon but the problem is this silly dog tries to touch bottome when he can't which mean his back legs are trying to touch and he can barely stay afloat with his head just above water and cannot move until he touches or tries to get closer to shore. So he circles by the shore as I shake my head and can't help but laugh at this dog with webbed toes and this terrible habit he has always had trying to touch bottom. Well after that ordeal we were back at it. With my daylight closing in I had to take plan b back home and then back into Gay City where I took plan B there as well and made the quickest route to the car. By now the dog was really lacking behind, poor guy, I am going to see if we can get him back into prime condition when I get back from Utah. As I rode out of the lake I was warned they're closing the park and I narrowly got to my car and sped out of there. Probably my last ride until next week when we are in Utah. I plan to ride Tuesday morning with my good friend Brent, going to do a 20 miler in Corner Canyon with some serious DH action! I can't wait to descend for 30 minutes, you just can't do that here in the East and I can't stand it! Got a few other rides planned, I have a monster planned for an entire day ride, hopefully I can find time to do it, probably around a 80+miler with 10k vert, see what happens I guess. I am pretty sure if I do it, I would be the only one who ever even though of it. 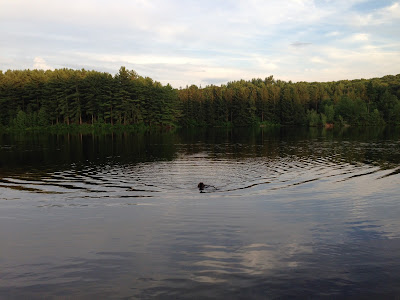 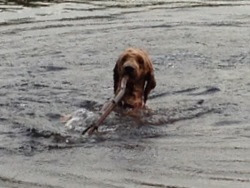 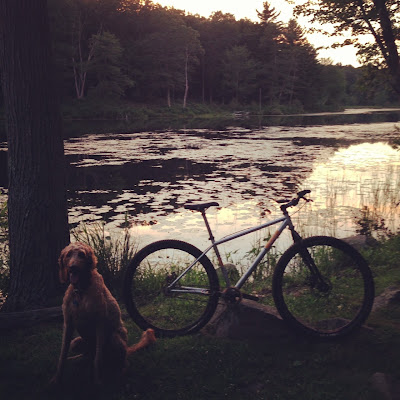 Quick roll gay to case at EveryTrail
EveryTrail - Find the best Hiking in Connecticut
Posted by TheBIkePedalingGinger at 10:40 AM